You are here: Home / Recommended Read / The Courtesan Duchess by Joanna Shupe 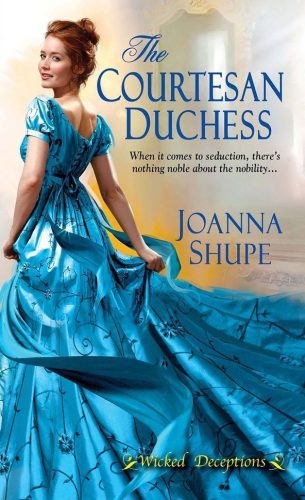 Readers often debate what is romance or if particular book is romance or something else that has romantic elements.  Technically, pure romance is defined as a book where the plot consists of a romantic relationship between its protagonists.  Meaning, if you took the romance out of it, the book wouldn’t exist.  Most books usually achieve some degree of romance because there is usually some sort of extraneous plot.  For example, in Hidden Legacy there is usually a mystery.  If you took Rogan and Nevada’s relationship out of it, the books would collapse, but there would still be some chunks left.

THE COURTESAN DUCHESS is about as close to pure romance as you can get.  There is a mystery plot, but it’s still wrapped up in the romance. If you took romance out of this book, there would only be crumbs.

For Julia, the Duchess of Colton, such a ruse promises to be foolproof. After all, her husband has not bothered to lay eyes on her in eight years, since their hasty wedding day when she was only sixteen. But what begins as a tempestuous flirtation escalates into full-blown passion—and the feeling is mutual. Could the man the Courtesan Duchess married actually turn out to be the love of her life?

I really enjoyed this one.  Warning: the level of heat is pretty high.  It felt fresh and it was exciting and it reminded me of Johann Strauss’s operetta The Bat in the best of ways.  It was witty and bright, and the setting of Venice was so unexpected. I also enjoyed the grovel quite a bit. 😉 I found The Courtesan Duchess after reading TYCOON. It’s very rare to see historical US romance set in anything other than Regency or occasionally Victorian time period. I’m all like “Zorro romance!  Intrigues of Madrid Court!  France!” and the romance market is all “Here is another book set in England where they drink tea and give each other cut direct.”

The Knickebocker Club series is set in 1920’s, which I normally steer away from, but I found it refreshing.  It requires some suspension of disbelief and there is a bit of instalove in this one, but I enjoyed it.  It was a guilty pleasure.  😀

Sometimes the journey is more pleasurable than the destination . . .

Standing on the platform at Grand Central Depot, Ted Harper is surprised by a fiery kiss from an undeniably gorgeous damsel in distress. He’s certain she’s a swindler who’s only after his money, but he’s never met a woman so passionate and sure of herself. Disarmed, he invites her to spend the journey to St. Louis in his private car—perhaps against his better judgment…

Clara Dawson has long known how to take care of herself, but the savvy shop girl is at a loss when she witnesses—and becomes entangled in—a terrible crime. Desperation propels her into a stranger’s arms at the train station, but she hadn’t expected Ted to offer her the protection she so badly needs—nor did she expect their chemistry to develop more steam than the engine of the train. He’s everything she never thought she could have, and she’s everything he didn’t know he wanted. But as her secrets begin to unfurl, their fledgling romance could be in danger of derailing before they arrive at the next station…

There is just something about Joanna Shupe’s work that really speaks to me.  Of course, your mileage may vary, so as always, I recommend downloading a sample first to see if you like it.

Buy and exceprt links for your convenience: