You are here: Home / Recommended Read / Tsumiko and the Enslaved Fox

I have a book for you. 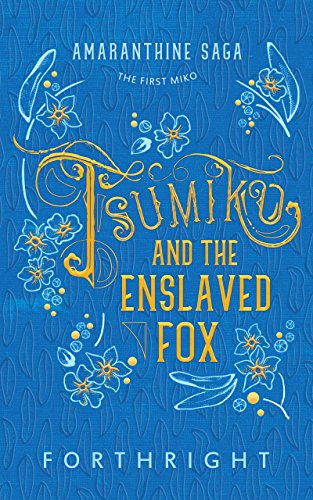 Tsumiko inherits an ancestral home, a vast fortune, and a butler who isn’t exactly human.

Humanity is rocked by the Emergence of a people who call themselves the Amaranthine. They are our myths and legends come to life. Neither human nor animal, yet embracing qualities of both, the inhuman races inspire both awe and fear. Every newsfeed is clogged with updates about the peace process, but some places don’t concern themselves with worldly affairs. Like the girls’ school run by Saint Midori’s of the Heavenly Lights, where Tsumiko Hajime grew up.

A letter from a long-lost aunt names Tsumiko heiress to an ancestral estate and its accompanying fortune. Only the legacy comes with an aloof heirloom: an inhuman butler. Argent has served the Hajime family for centuries, and Tsumiko must renew the generational bond or he’ll die. Argent hates her for the hold she has over him, but he craves her soul almost as much as he craves his freedom.

I loved this book.

I don’t remember who suggested it, but whoever you are, thank you.

In this world, there are humans and inhuman races: Dogs, Wolves, Horses, Dragons, Foxes, and many others. Inhuman races lived in the shadows for centuries, eluding discovery.  They have great magic powers and they live according to ancient traditions.  They can take human form, but in their true shapes they brush against the tree branches. They call themselves the Amaranthine.

Humans possess something the Amaranthines desperately crave – some of them have radiant souls, so beautiful that the Amaranthines would do anything to remain near. They crave the taste of those souls so much, some of them would devour the human to experience it. For centuries, they did just that until some of these humans bound together and learned to defend themselves through magic.  These people became the first reavers. They are mages and battlers; they set wards, fight, and rescue.

The reavers acted as guardians of the human race for centuries, but now the Amaranthine revealed themselves to the world.  They seek equal rights and acceptance. Their children are going to human schools, their representatives communicate with human governments, and the reaver job has gotten a lot more complicated.

Tsumiko is in her early twenties, a teacher in a school she once attended as a student, when she finds out that she inherited a house and a sizeable fortune from a distant relative.  She arrives to the house and meets the staff: Michael, his lovely wife Sansa, and Argent.  Michael and Sansa are reavers.  Michael is the Ward, a defensive mage, and Sansa is a battler.  She has a giant magic panther she affectionately calls koshka (kitty) in Russian.  Tsumiko is a reaver, too, a rare and particular type, a beacon.  Her soul is so radiant, the Amaranthines will do anything to be near her. She glows like the moon.

Argent is something else entirely.  He is a Fox Amaranthine, and he has been enslaved and bound to Tsumiko’s bloodline.  It’s a long generational curse, reinforced with each new owner.  It hobbles Argent’s strength, and if it’s broken, it will kill him. Argent is incredibly valuable.  People would kill to possess him.

Here is Tsumiko’s take on it:

Tsumiko shifted uncomfortably in her seat. “I thought one of the reasons the inhuman races came forward was so that they could be recognized as citizens of our planet, with the same inherent rights as humans.”

“Yes.” Michael’s smile faded. “The leaders of the Five Clans are doing everything they can to establish a place for the Amaranthine. Peace treaties, alliances, registries, amendments, and bills of rights are being negotiated at the international level.”

“Because the Amaranthine are people.”

Tsumiko would have thought it obvious. “How can I inherit a person?”

This is Tsumiko.  She is a very low angst heroine, and at first, it’s easy to dismiss her as passive, but there is a quiet moral strength there that is unbreakable.  She decides that Argent’s enslavement is wrong and she never wavers.

Argent… Argent is a seriously complicated hero.  He is a fox, and he is true to being a fox.  He says one thing when he means another. He has incredible power, but can do very little without Tsumiko’s permission. At the start, he is determined to hate her, as he hated all his human owners. But he requires access to her soul.  She has to tend to him or he will die.

Tsumiko takes tending as her duty.  This is what has to be done to make sure Argent lives and ultimately can be freed.  She never asks for anything in return. Her feelings for Argent grow. Watching their relationship unfold is incredibly satisfying.

Flatness was back in his tone, a wary weariness. As if she’d finally done as he expected. As if she’d use him because she could.

“What if I told you—ordered you—to take the night off?” Her fingertips rested on his bare shoulder. “To fly as far as you can, to run wild, to feel the wind in your tails. And to be back in time for breakfast.”

Silence quavered between them, and suddenly, he was on his knees before her.

Tsumiko didn’t want him abasing himself or begging. She tugged at his arm, protesting, “Don’t!”

But he caught her wrists, held her captive with a look. “Say it,” he said fiercely. His lips brushed her knuckles. “Grant it.”

That hurt. That he thought she’d tease him with a treat, then withhold it. But she set aside her feelings and answered him in kind. Taking his hands, she kissed his knuckles and repeated her order in even tones. “Argent, take tonight for yourself. Fly freely. Run wild. Do as you please.”

His only answer was a shaky exhale.

Then she was in a whirlwind of power and petals, hair whipping up and blinding her. When the storm died, she shivered, for the balcony doors were once more wide-flung, and she was alone.

He was gone. So far gone, she couldn’t feel him.

After months living with the constant press of his presence, he’d left a gaping void, brutal as death, bleak as its aftermath. He was gone. Because that’s all he’d ever wanted. To go.

That also hurt. And Tsumiko’s conscience writhed, for she’d uncovered an uncomfortable truth.

She didn’t want Argent to go.

I told you, never wavers.  No matter how difficult it is.

It is a love story, populated with endearing and enigmatic characters, who are trying to deal with all the complications of navigating this new world. The story doesn’t shy away from the uglier aspects.  There are brutal battles.  There is a woman dealing with a pregnancy resulting from rape. But there is a lot of hope.

I loved it.  I feel really beat down lately, by stress, by news, by overworking, and this book appeared at a perfect time for me. Of course, there are flaws – Tsumiko needs a face, some segments felt rushed, etc – but I was willing to forgive them, because the narrative delivered the emotional payoff I was looking for. If you like anime, you will like this.  If you enjoyed the Others by Anne Bishop, you will like this. I want book 2.  Hurry up, Forthright, and drop it already.

As always, take me with a grain of salt and try samples before buying. Order links: Amazon | BN | I can’t find it anywhere else.